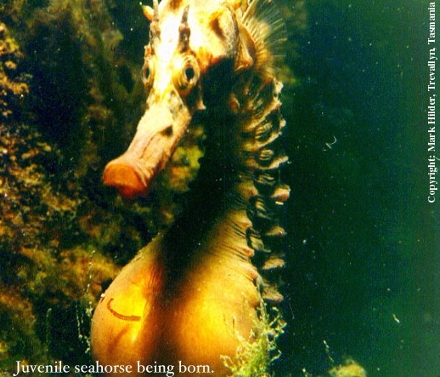 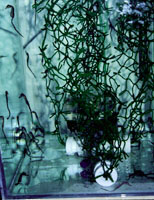 H. Abdominalis reaches a large 14"! In addition to the olive-green color with the black large oval dots, it has long pulled-back-looking spikes off the head. The spikes are up to 1/2" long, and are located on the crown forward only. There are 2 spikes above the eyes, and then a few to the bend in the neck. There they end. Eyes may have a small red pinstripe in them, running down the eye. They are found in South Eastern Australia, and Tasmania. Commonly called "The Pot Bellied Seahorse".

It has now been recorded in Perth, Western Australia and it is also found in New Zealand. The "spikes" are actually soft and grow right down their backs. Sometimes the spikes get algae growths on them making the horse very cryptic looking.

Young are born at around 28 days gestation, and are 25mm long, will take 2 -3 day old artemia.

Colors range a fair bit... white through to the deepest brown, yellows and particularly muddy combinations. They mimic their surrounds very well, such that oceanic specimens (by far and away the biggest) are usually yellows to match bull kelp, while estuarine specimens are usual muddy green to match their surrounds.

I've seen some very interesting animals on sand in seagrass which were predominantly white with pale yellow green patches.

Those spikes are not all that common, it's more common to find them with out spikes, the spikes don't appear to be related to age either, some quite young animals have them.

Feed for adults: literally anything small that moves. They can be trained (with patience) to take dead feed, I had one lot eating frozen krill. I'd put the frozen block in the tank and the horses would come over and knock at the block to free the individual krill which they would then eat. Thawing the krill didn't work 'cause it all went to the bottom and the seahorse missed it leaving the little goby on the bottom rather fat(!)